Vincent Ingala - Echoes Of The Heart 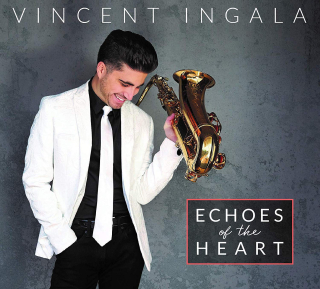 When, back in 2018, I reviewed ‘Personal Touch’ by writer, producer and multi instrumentalist Vincent Ingala I described him as being the breath of fresh air that smooth jazz fans had long been craving.  Now, with a street date of February 21, he is back with the excellent ‘Echoes Of The Heart’.  This ten-track tour de force includes nine original compositions plus one carefully crafted cover and with guest performances from David Benoit and Steve Oliver is the sort of project that will continue Ingala’s fast track progress toward the upper echelons of the genre.

‘Echoes Of The Heart’ is quickly up and running with the sumptuously in the pocket ‘Caught Me By Surprise’that confirms Ingala as the perfect purveyor of ultra catchy contemporary jazz.  In similar vein is ‘Let’s Get Back’ that Ingala bestows with a lusciously horn driven veneer and although ‘Take Your Time’ is another of those songs on which the listener will quickly become hooked it is his remake of Amy Grant’s ‘90s hit ‘Baby Baby’ that is likely to have a similar effect.

Elsewhere the silkily mid tempo ‘Maybe You Think’ proves to be a superb vehicle for Ingala’s smooth playing on sax and when he switches to guitar for the rhythmic  ‘What’s Option B’ the outcome is just as good.

Later, when Ingala eases down the tempo, the result is the decidedly romantic ‘Ready Or Not’ that, complete with atmospheric backing vocals, is right up there with the best that ‘Echoes Of The Heart’ has to offer.  Much the same can be said of the absolutely wonderful ‘Somewhere In Time’ that features pianist David Benoit.  Ingala recently featured on Benoit’s hot new album, ‘David Benoit And Friends’ and here Benoit repays the favor with input that is totally mesmerizing.

The mellifluous title cut includes a top-notch solo on keyboards from highly rated composer and keyboard player Chris Geith and when Ingala teams with Steve Oliver for the zesty ‘Sunset On Marco’ it provides a stunning conclusion to what, overall, is a stunning collection.